This showcase is a twofer, and it's near and dear to me because these people are doing what I'd like to be doing with my life. They're both pattern designers but they design different things. They're both sincerely talented gals and you all should go buy things from them, if not patterns, then one of the things they've crafted.

I'm promoting these in the order in which I received the patterns they graciously let me test for free. First up is CarmenBee. I found her blog through Ravelry. She had been a featured designer for a really cute shrug she designed. (It's currently a work in progress).

She let me test the pattern for her Baby Hoodie. You can purchase it through her Etsy. It's an easy pattern and works up in a couple hours. It's probably faster if you haven't got a toddler to chase. :D I unfortunately don't have a baby around to model the hoodie, but I DO have a teddy bear. Hopefully he will suffice. 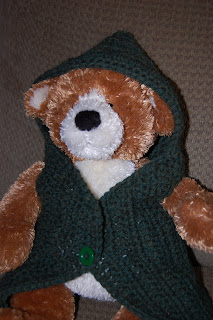 She also graciously answered some of my goofy, newbie blogger questions. These will hopefully be a staple of the Sunday Showcases to come.

How long have you been crocheting?
How long have you been designing patterns?
How did you learn to crochet?
What is your favorite pattern that you've designed?
What pattern would you recommend to a beginner?
Thanks again for letting me test that pattern and for answering my questions. Everyone, go forth and buy some of her patterns! They're super easy to follow.


The second person in the showcase is someone I met through a crocheting thread I frequent on my favorite forums. :D She specializes in amigurumi and I'm glad she does. Her stuff is some of the most professional and cutest I've ever seen. Currently she's only got the pattern for a cat at her Etsy shop, but I'm hoping she'll post the patterns for some of the cute stuff she posts in the thread sometime soon.

She also was very gracious about the question answering. :D

How long have you been crocheting?
How long have you been designing patterns?
How did you learn to crochet?
What is your favorite project you've designed?
What pattern would you recommend to a beginner?
Go out and buy the cat pattern from her! Keep your fingers on the refresh button until she posts more patterns to buy, and then GO BUY THOSE! :D

More pattern posts to come. If you buy a pattern from these two, send me a picture at armyofowls@gmail.com of the finished product and I'll post them on the blog.

Posted by HeartofGoldPlate at 3:55 PM

HeartofGoldPlate
Glen Danzig and I would like your skull, please. We need it.